The annual global production of cacao in Latin America is in the realm of 6.3 hundred-thousand metric tons. That’s an astounding figure, but especially considering that the scientific community doesn’t know exactly what pollinates it.

Justine Vansynghel is one of the researchers who is working to change that. She is a PhD candidate in the Department of Animal Ecology and Tropical Biology  at the University of Würzburg in Germany, but she is originally from Ostend, Belgium—as she puts it, “I grew up in an urbanized city by the sea, and that’s a weird place to come from as a tropical ecologist.” Over the past two years, she’s been conducting pollination studies in the fine & flavor cacao (FFC) project’s test sites near La Quemazón, Piura, and it’s been a feat of dedication. 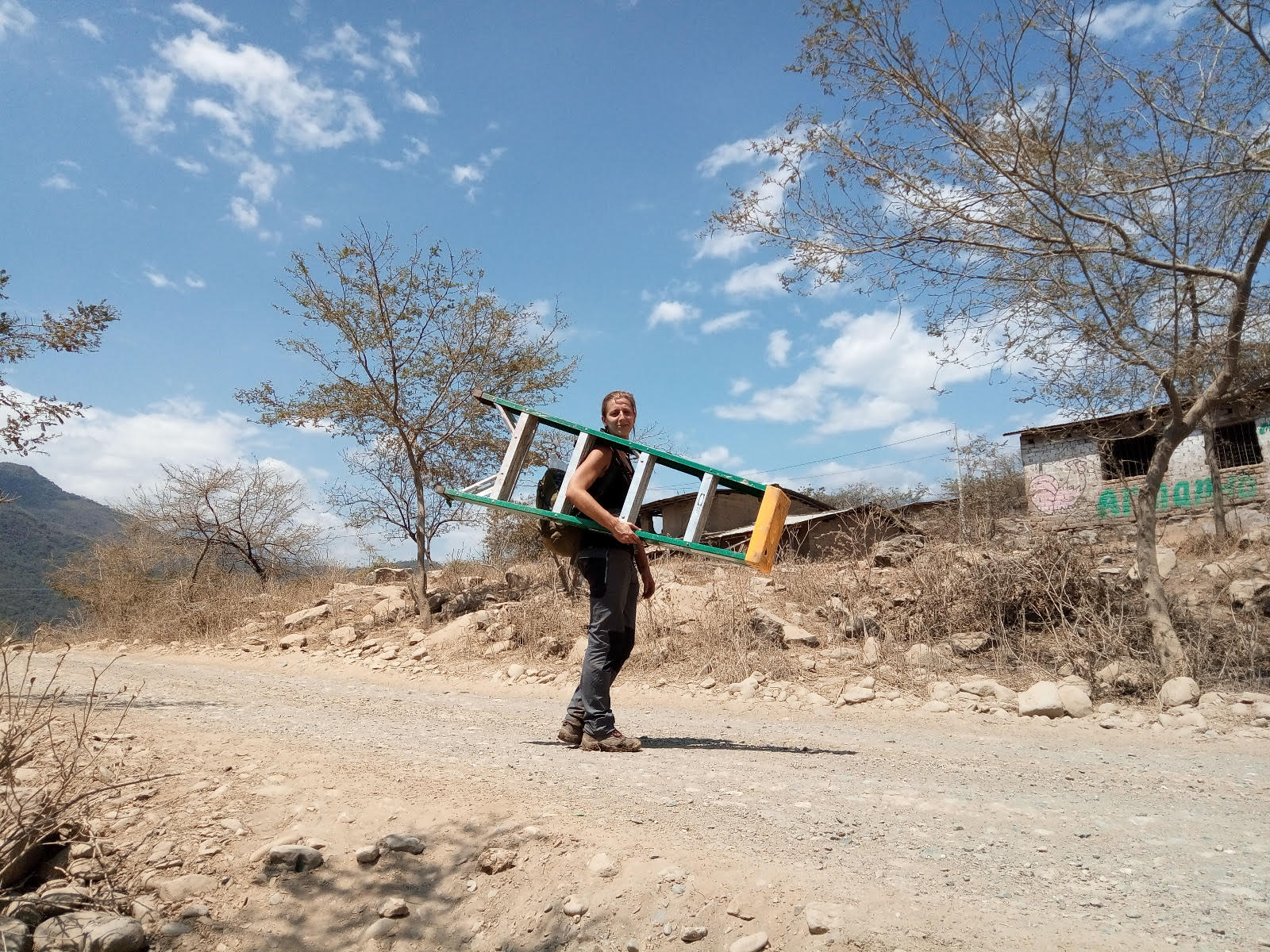 Justine carries a ladder out to her field sites near La Quemazón.

So why don’t we know?

In the late 1970s, researchers conducted some observational studies in order to better understand cacao pollinators. Their methods weren’t particularly robust, but they concluded that small flies, called “midges”, were most likely the dominant pollinators. Recently however, there’s been evidence to the contrary; some researchers have found that midges aren’t the primary visitors to cacao plants, which casts significant doubt on the theory that they are the dominate pollinators. This is exactly what Justine found in her preliminary studies, so she set out to answer the somewhat daunting question of, “If not midges, then who?” This has required a lot of insect trapping glue and many hours of observation.

Justine supposes that partly why the scientific community doesn’t know that much about cacao pollination is because it’s seriously exhausting to study. To start with, cacao flowers are numerous and tiny. In some varieties, there are up to ten thousand flowers per tree, while the midges, the suggested pollinators, are only 2.5 millimeters long. Not only that, but a single tree typically only produces about 20 to 25 fruits, which means that cacao’s mechanisms to “abort” fruits are complex and significant. It also means that the chances of a flower becoming fruit are about 1 in 400, while the likelihood of documenting this process is even lower.

Justine suspects the other reason that cacao pollination hasn’t been prioritized in the scientific community is because despite its dramatic flower to fruit ratio, commercial cultivars assisted by pesticide application are generally productive. However, other recent studies, with which Justine’s early investigations in La Quemazon agree, seem to demonstrate that pollination is in fact a limiting factor on cacao fruit yield. This is important information for the FFC project, which aims to make native cacao productively competitive with its commercial counterparts. Productivity is also the driving force behind Justine’s ant investigations. In Indonesia, researches found a positive correlation between ant presence and cacao productivity, so she has also collected data on ant presence to evaluate if this correlation also exists for Piura’s cacao blanco. 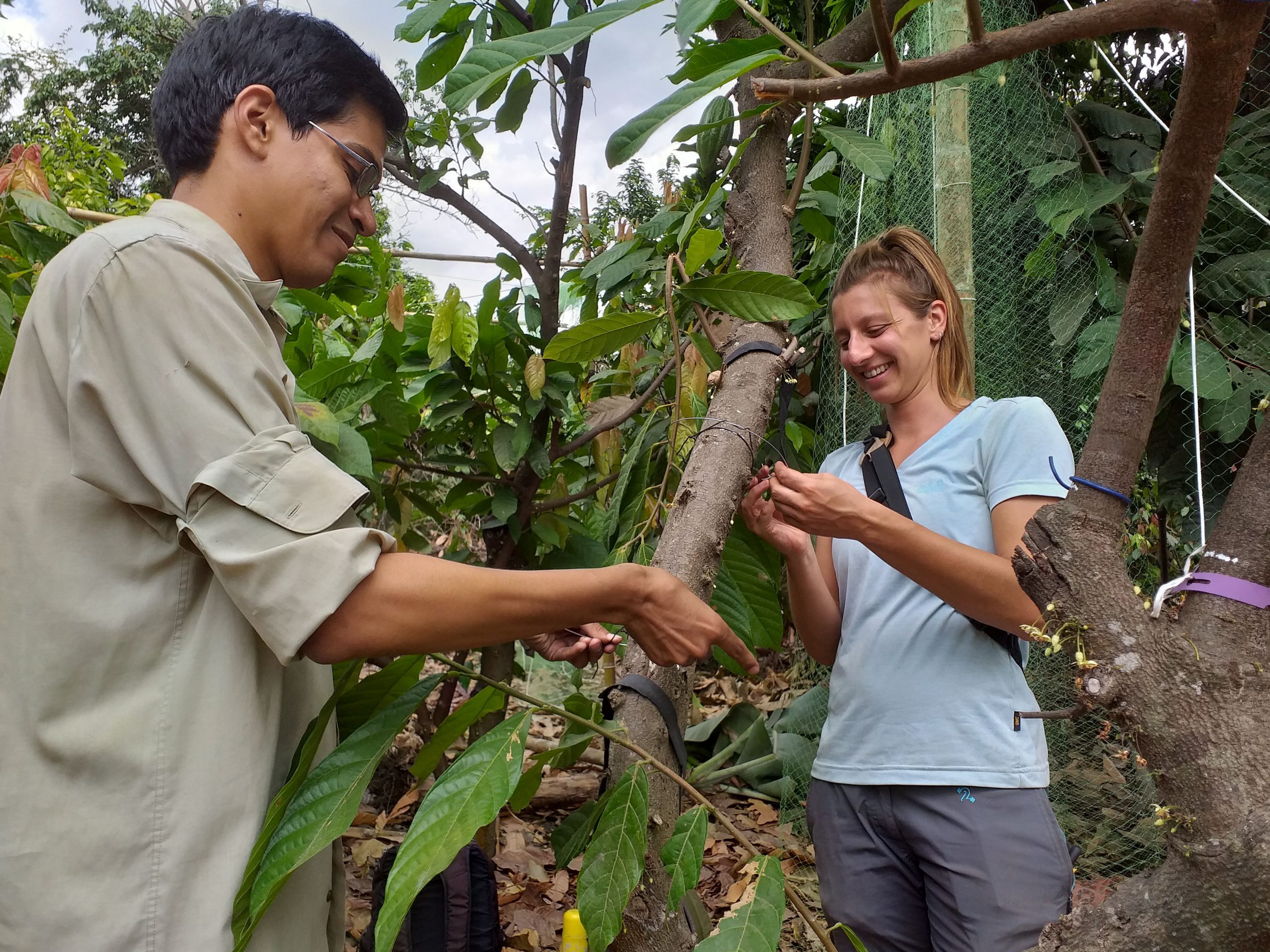 With pollinator and ant trapping completed for identifications back in the lab, Justine started her assisted-pollination and ant/pollinator exclusion experiments in October last year. The methods were labor and time intensive, so she needed a team. “We had research assistants from all over Europe working alongside students from the local University of Piura; we hired a 17-year-old who was considering agricultural sciences in university; and we also hired a woman from La Quemazón who had expressed interest in the project.” Of course, leading a team of young researchers that don’t speak the same language had its challenges, but Justine feels like it was a privilege to facilitate such a formative, intercultural experience for her peers.

Justine will be back in La Quemazón and collecting harvest data from March to June this year. Once finished, she will spend the final year of her PhD doing data analysis in Würzburg—trying to understand which insects contribute to native cacao pollination and to what extent flower visitation and pollen deposition is limiting productivity. When asked about her biggest challenges on the project, Justine highlights the pressure she feels when answering the questions of farmers who have allowed her to come into their cacao farms. They ask, “Okay, so what’s going on?” and she gets it. She wants to know too. She explained, “Within the scientific community, and with farmers and peers, they expect you to be the researcher that has all the answers, and we’re getting there, but it takes time…” and added, “Plus, we may not get ALL the answers.”

In May 2021, Justine will return to La Quemazon to present her official findings directly to the community and she hopes by then, that she’ll have some answers to the tough questions. In the meantime, she’s just happy to have overcome the community’s initial confusion about her presence and so grateful for the hospitality that she’s received. As a young, foreign, female scientist collecting bugs in northern Peru, she feels pretty lucky to have formed such meaningful relationships within a culture that is so different from her own. 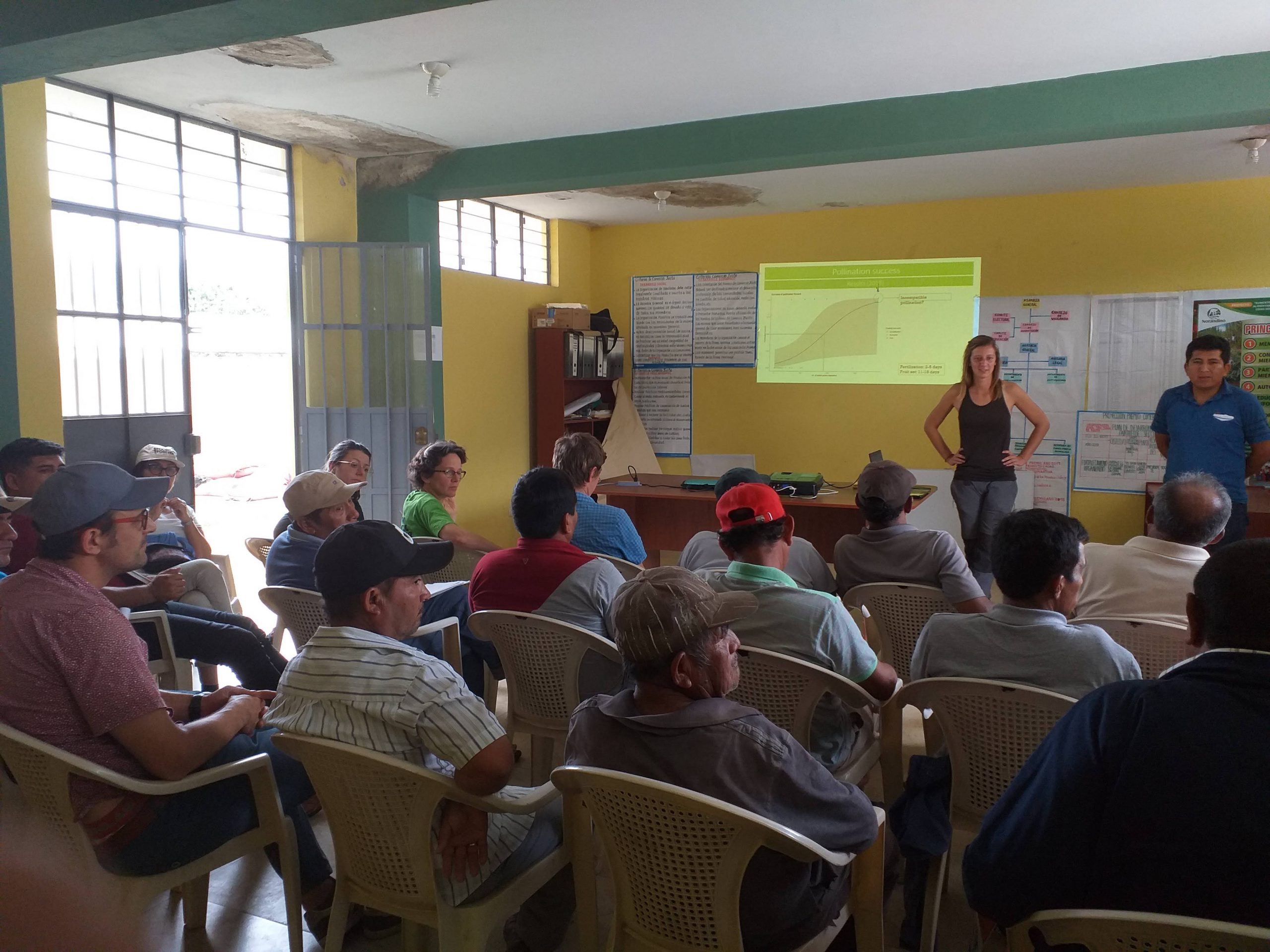